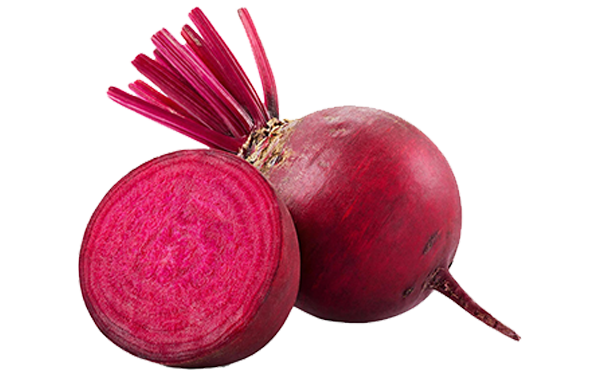 Beetroot is a good source of carbohydrates and proteins and is also rich in a variety of vitamins (including vitamins A, B and C) and minerals.

Beetroot is a good source of carbohydrates and proteins and is also rich in a variety of vitamins (including vitamins A, B and C), minerals (including magnesium, manganese, sodium, potassium, calcium and phosphorus), antioxidants (such as betanin, the pigment that gives beetroot its colour) and other nutrients, such as soluble fibre, iron, folic acid and betaine.
It has a very low caloric value, is almost entirely free of fats and has a low glycaemic load. It is also extraordinarily rich in dietary nitrate, making it popular with athletes. This nutrient leads to a reduction in oxygen uptake, increasing stamina and making exercise less tiring. Studies have demonstrated the positive effects that beetroot can have on exercise performance and muscle growth.

For example, in the famous study conducted by Exeter University, scientists found cyclists who drank a half-litre of beetroot juice several hours before setting off were able to ride up to 16% longer than those who drank a placebo blackcurrant juice. As such, it is now used by many athletes during times of extreme training, when demands for energy and recovery are high.