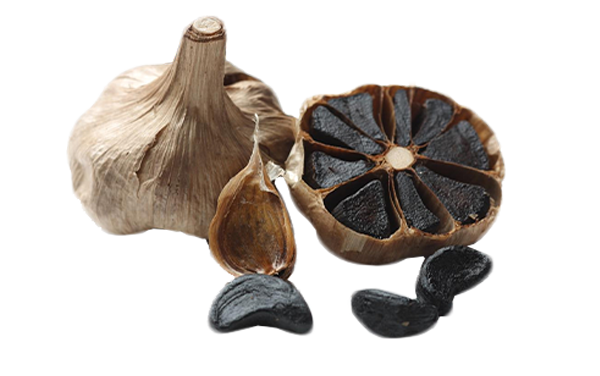 Black garlic is a functional food produced from fresh garlic via fermentation with the whole bulbs or peeled cloves in a chamber in which temperature (60–90°C) and humidity (70–90%) are regulated for a period of time.

Black garlic is a functional food produced from fresh garlic via fermentation with the whole bulbs or
peeled cloves in a chamber in which temperature (60–90°C) and humidity (70–90%) are regulated for a period of time. Black garlic possesses an abundant amount of antioxidant compounds such as polyphenols, flavonoids, tetrahydro-ß-carboline derivatives, and rganosulfur compounds, including S-allyl-cysteine and S-allyl-mercaptocysteine, as compared with fresh garlic.

Note that fermentation not only alters the nutrition components and sensory attributes, but also enhances the bioactivity of black garlic. A growing body of evidences demonstrating therapeutic effects of black garlic, including anti-obesity, immunomodulatory, hypolipidemic, antioxidant, hepatoprotective, and neuroprotective effects, have been reported in
the last few decades.

Garlic is a broad spectrum anti-viral and antibiotic, capable of fighting infection and killing a wide variety of fungi
(more than 60), bacteria (more than 20), viruses, protozoa, parasites and amoebas. This is largely because of its active
constituents, allicin and ajoene. Once garlic is chopped or crushed,
allicin is formed. It has anti-bacterial, anti-fungal and anti-parasitic activity, which is one of the main reasons that garlic has traditionally been used in enemas to rid the colon of intestinal parasites.